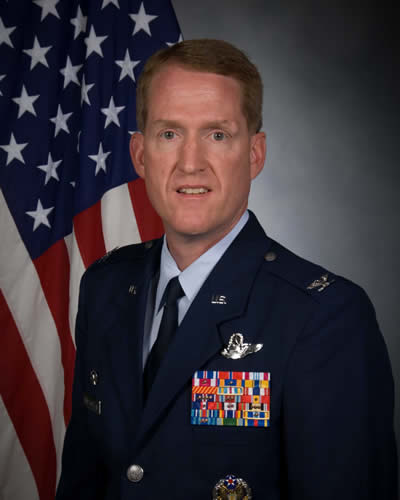 Col. Troy Van Bemmelen earned his degree in Design Mechanical Engineering at Michigan Tech University. He enrolled in the Air Force ROTC program and was commissioned as a Second Lieutenant. After attending Undergraduate Pilot Training, he was selected to fly bombers and was assigned to Minot AFB, ND flying B-52’s.
As a top notch pilot, he was hand- picked to be part of the B-2 Stealth Bomber Team at Whiteman AFB, MO in 1996. His missions included flying in the NATO air operations in Kosovo in 1999 and again in support of Operation Iraqi Freedom. He was deployed to Afghanistan in support of Operation Enduring Freedom.
Troy has been selected to command the Fifth Operations Group, Minot AFB, ND where he will be in charge of flying operations for the B-52 aircraft.
Troy is a nationally ranked racquetball player and will compete in the 2010 U.S. Open National Racquetball competition. Col Van Bemmelen has recently relocated to Minot, ND with his family.