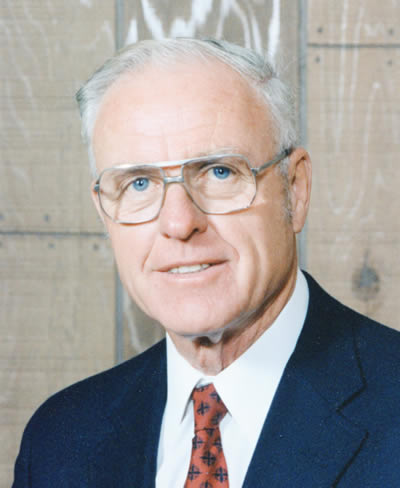 At GHHS, Charles Rycenga, Jr. played Buccaneer football as a fullback and captained the basketball team his senior year. In 1942, he enlisted in the Navy and served in the South Pacific until 1945.
He attended Grand Rapids Junior College and obtained his Associate Degree in Business from Davenport College. In 1947, Chuck joined his brother, Louis at Rycenga and Sons, a wood and sawmill business their father had started in 1931. The business thrived after WW II, building garages, cottages and eventually, pre-fabricated homes. They developed many local subdivisions including North and South Holiday Hills, Swiss Village, and Dermshire Forest.
Chuck has always been dedicated to community activities and community goals. His work reflects his spirit. Chuck has served our community on numerous boards and commissions including the Grand Haven Area Community Foundation, Grand Haven Rotary, Grand Haven Planning Commissions and the Salvation Army. He was the President, Founder and Chairman of International Aid. He helped teach GHHS students how to build homes from the ground up and committed to donating one house a year for the program.
Chuck and his wife Non have two daughters, one son, 15 grandchildren and 10 great grandchildren.
Chuck and Non’s philanthropic deeds to the community are legendary. Chuck has been a guiding force for Habitat for Humanity, has made it possible for scores of high school students to go on to college, and, through a 40 acre donation of land in Spring Lake Township, has  allowed the Rycenga Recreational Park to become a reality.